‘Six days before the Passover, Jesus came to Bethany, where Lazarus was, whom Jesus had raised from the dead. There they made him a supper; Martha served, and Lazarus was one of those at table with him. Mary took a pound of costly ointment of pure nard and anointed the feet of Jesus and wiped his feet with her hair; and the house was filled with the fragrance of the ointment. But Judas Iscariot, one of his disciples (he who was to betray him), said, “Why was this ointment not sold for three hundred denarii and given to the poor?” This he said, not that he cared for the poor but because he was a thief, and as he had the money box he used to take what was put into it. Jesus said, “Let her alone, let her keep it for the day of my burial’.

The image below shows Mary Magdalene from Fra Angelico’s Cortona Polyptych; in the full image she is holding her alabaster jar. The directness of her gaze upon the Lord shows both humility and strength.

As we begin our Holy Week together, may Mary pray for us and may we be unafraid of giving all our love to our Lord, breaking open our own ‘alabaster jar’, as she did. May God bless you. 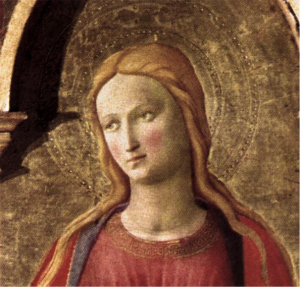