The image below shows an old photograph of the structure built over the tomb of Jesus within the Church of the holy Sepulchre, Jerusalem. The photo was taken during the 1940s. Recent archaeological research has confirmed that the team sent by the Emperor Constantine around 325 AD found a temple built over the tomb site some 200 years before. Beneath this, they found a tomb hewn from the rock, with the shelf for the body to rest on, as was the custom in first century Jerusalem.

The edifice we see today, called the Aedicula, rests over this entire structure and incorporates much of the original tomb area.

This extract from today’s Gospel gives us the account, that we too may believe.

May God bless your Easter. 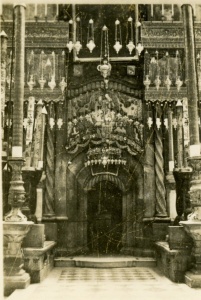