The image is that of the risen Christ with Mary, a detail taken from a fresco by Giotto di Bondone.

Of this moment of encounter and recognition, St Augustine wrote: ‘When she had thus said, she turned herself back, and saw Jesus standing, and knew not that it was Jesus. Jesus says unto her, “Woman, why do you weep? Whom do you seek?” She, supposing Him to be the gardener, says unto Him, “Sir, if you have borne Him hence, tell me where you have laid Him, and I will take Him away”. Jesus says unto her, “Mary”. She turned herself, and says unto Him, “Rabboni”, which is to say, Master. Let no one speak ill of the woman because she called the gardener, “Sir” (domine), and Jesus, “Master”. For there she was asking, here she was recognising; there she was showing respect to a person of whom she was asking a favour, here she was recalling the Teacher of whom she was learning to discern things human and divine. … But how was it that this woman, who had already turned herself back to see Jesus, when she supposed Him to be the gardener, and was actually talking with Him, is said to have again turned herself, in order to say unto Him “Rabboni,” but just because, when she then turned herself in body, she supposed Him to be what He was not, while now, when turned in heart, she recognised Him to be what He was’.

May we too turn our hearts to the risen Lord, recognising Him for who He is. May God continue to bless your Easter. 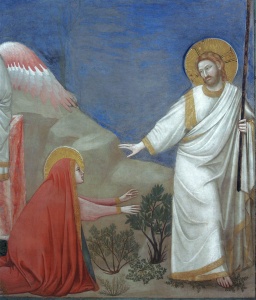