For today’s Gospel reading we have the Emmaus story, from St Luke’s Gospel. Here is the actual moment of recognition: ‘So they drew near to the village to which they were going. He [Jesus] appeared to be going further, but they constrained him, saying, “Stay with us, for it is toward evening and the day is now far spent.” So he went in to stay with them. When he was at table with them, he took the bread and blessed, and broke it, and gave it to them. And their eyes were opened and they recognised him; and he vanished out of their sight. They said to each other, “Did not our hearts burn within us while he talked to us on the road, while he opened to us the scriptures?”’

Of this amazing moment, St Augustine wrote: ‘Remember, dearly beloved, how the Lord Jesus desired to be recognised in the breaking of bread, by those whose eyes had been kept till then from recognising Him. The faithful know what I’m talking about. They know Christ in the breaking of bread. It isn’t every loaf of bread, you see, but the one that receives Christ’s blessing and becomes the body of Christ. That’s where they recognised Him. They were overjoyed and went straight to the others. They found Whom they already knew. By telling what they had seen, they added to the gospel. It was all said, all done, all written down. And it has reached us’.

May God bless you this day, and may you know Him in the breaking of bread. 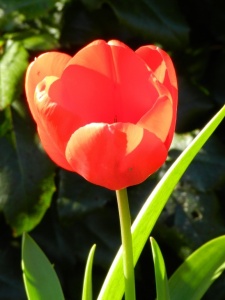