Of the three shepherd children who witnessed the Fatima apparitions in 1917, only Lucia, on the left in the image below, lived to a great age. Her path is described as ‘a pathway under the gaze of Mary’. Initially as a Sister of St Dorothy, and later as a Carmelite, her mission was to spread the message, to speak of what she had seen and heard.

In the Convent of St Dorothy, at Tuy, Sr Lucia had an apparition on 13 June 1929. She described it in these words: ‘I had requested and obtained permission from my superiors and my confessor to make a holy hour from 11.00 pm to midnight, from Thursday to Friday of each week. Finding myself alone one night, I knelt down near the Communion rail, in the middle of the chapel, to recite the prayers of the Angel, lying prostrate … Feeling tired, I got up and continued to recite them with my arms in the form of a cross. The only light was that of the lamp. Suddenly, the whole chapel lit up with a supernatural light and on the altar appeared a cross of light which reached the ceiling. In a clearer light, on the upper part of the cross, could be seen the face of a man with His body to the waist, on His chest a dove, equally luminous; and nailed to the cross, the body of another man. A little below the waist, suspended in the air, could be seen a Chalice and a large Host, on to which some drops of Blood were falling, which flowed from the face of the Crucified One and from the wound in His breast. Running down over the Host, these drops fell into the Chalice. Under the right arm of the cross was Our Lady with Her Immaculate Heart in Her hand … (She appeared as Our Lady of Fatima, with Her Immaculate Heart in Her left hand, without sword or roses, but with a crown of thorns and flames). Under the left arm of the cross, in large letters, like crystalline water which flowed over the altar, were formed these words: “Grace and Mercy”. I understood that the mystery of the Most Holy Trinity was shown to me’.

‘Grace and mercy’: these words have resounded down the centuries, given fresh impetus in our own times by the message of Fatima. May we live them in our own lives, and may God bless you this day. 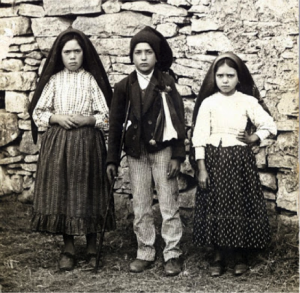