Today’s saint is venerated as the father of cenobitic monastic life, that is to say the common life, monastic life lived together with others. Living in the fourth century, he received several angelic visitations, one of which is pictured below. At the beginning of his monastic life, an angel from God appeared to him wearing a monastic habit, and gave him instruction concerning the form of monastic life he was to embrace.

Later in his life, when he learned that future monks would not have such zeal as the first generation had, he heard an interior Voice: ‘Pachomius, be mindful of the mercy of God. The monks of the future shall receive a reward, since they too shall have occasion to suffer the life burdensome for the monk’.

Today we pray for all monastics, that we may live out our calling with zeal, always mindful of the mercy of God, and may God bless you in your own calling. 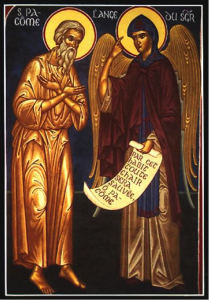