The icon shown below is actually entitled ‘The Embrace of the Apostles Peter and Paul’. Both are gazing beyond, into the unseen. The liturgical celebration of the two of them together, transferred this year to the Sunday, dates back traditionally to at least around the third century. Both were martyred in Rome; St Peter below what is now the Basilica that bears his name; St Paul, according to tradition, is buried in the Basilica of St Paul outside the Walls.

St Augustine said of them: ‘Both apostles share the same feast day, for these two were one; and even though they suffered on different days, they were as one. Peter went first, and Paul followed. And so we celebrate this day made holy for us by the apostles’ blood. Let us embrace what they believed, their life, their labours, their sufferings, their preaching, and their confession of faith’.

May their lives, and their deaths, be an inspiration to us all, and may God bless you this day. 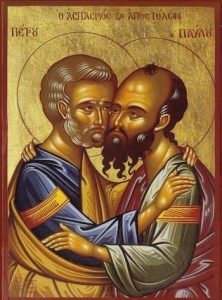