Blessed Anne Catherine Emmerich (1774-1824) had a vision of the appearance of our Lord to St Thomas, with the other disciples, after the Resurrection. She described it thus: ‘Thomas, very much frightened at the sight of the Lord, timidly drew back. But Jesus, grasping his right hand in His own right hand, took the forefinger and laid the tip of it in the wound of His left hand; then taking the left hand in His own left, he placed the forefinger in the wound of His right hand; lastly, taking again Thomas’ right hand in His own right, He put it, without uncovering His breast, under His garment, and laid the fore and middle fingers in the wound of His right side. He spoke some words as He did this. With the excla­mation: “My Lord, and my God!” Thomas sank down like one unconscious, Jesus still holding his hand. The nearest of the Apostles supported him, and Jesus raised him up by the hand’.

This encounter between St Thomas and the risen Lord was the deep foundation of St Thomas’ faith, which according to tradition took him as far as India.

May his exclamation ‘My Lord and my God!’ be ours too, and may God bless you this day. 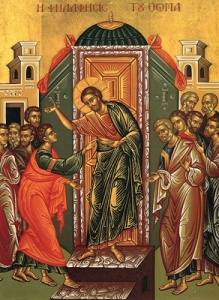