All three Synoptic Gospels tell of the Transfiguration, and here for the Year of Luke is part of his account:

‘Now about eight days after these sayings he took with him Peter and John and James, and went up on the mountain to pray. And as he was praying, the appearance of his countenance was altered, and his raiment became dazzling white. And behold, two men talked with him, Moses and Elijah, who appeared in glory and spoke of his departure, which he was to accomplish at Jerusalem’.

The word ‘departure’ in the original Greek is ‘exodus’, thus making a clear link between the exodus of Moses and the New Exodus accomplished by Christ. Elijah the prophet is also here, with his head inclined towards Christ, the supreme Prophet in Whom all the prophecies of the past find their perfect fulfilment – ‘a prophet, and more than a prophet’.

May the Transfigured Christ bring you much joy today, and light, and peace, and may He bless you in all that you undertake in His Name. 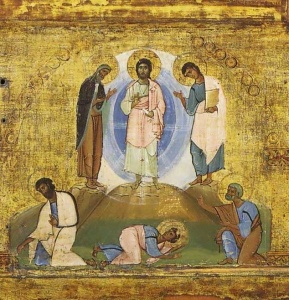