There is a tradition that St Ignatius of Antioch was the child whom Jesus called to Himself in the Gospel, as shown in this fresco, and as St Matthew relates: ‘And calling to him a child, he put him in the midst of them, and said, “Truly, I say to you, unless you turn and become like children, you will never enter the kingdom of heaven. Whoever humbles himself like this child, he is the greatest in the kingdom of heaven”’.

Later in his life, he was known as ‘Theophoros’, the ‘God-bearer’. We have his seven Epistles, written as a prisoner on his long journey from Antioch to Rome, where he was martyred in the course of the second century – the exact year is still the subject of debate.

May we too be ‘God-bearers’ in our own way, and time. May St Ignatius pray for us, and may God bless you this day. 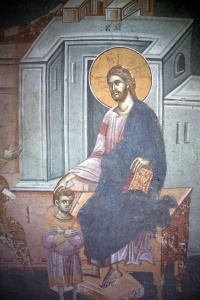