The icon of Our Lady of Vladimir, pictured below, was just catching the golden rays of the setting sun when the photographer happened to pass by …

Today’s feast, which has ancient roots, commemorates a younger Mary, in fact the beloved child of Anne and Joachim who presented and dedicated her to God in the Temple at Jerusalem.

The feast originated in the Christian East in the eleventh century and then was taken up in the Catholic Church as late as the fifteenth century. In the following century it was removed from the Catholic calendar and then put back (for good!) later in the same century.

So, today, we can celebrate the piety of Anne and Joachim, as well as the purity and holiness of their daughter, Mary. May God bless you this day. 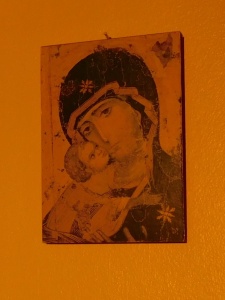