Here is our New Testament reading, from 1 Corinthians: ‘When I came to you, brethren, I did not come proclaiming to you the testimony of God in lofty words or wisdom. For I decided to know nothing among you except Jesus Christ and him crucified. And I was with you in weakness and in much fear and trembling; and my speech and my message were not in plausible words of wisdom, but in demonstration of the Spirit and power, that your faith might not rest in the wisdom of men but in the power of God’.

St John Chrysostom comments on this passage: ‘Not only are the believers unlearned persons; not only is he that speaks unlearned; not only is the manner of the teaching of an unlearned cast throughout; not only was the thing preached of itself enough to stagger people; (for the cross and death were the message brought;) but together with these there were also other hindrances, the dangers, and the plots, and the daily fear, and the being hunted about. … And again, “Wherefore I take pleasure in weakness”: then, saying in what, he added, “In injuries, in necessities, in distresses”. … He adds again, “and in fear, and in much trembling, I was with you”. How do you say? Did Paul also fear dangers? He did fear, and dreaded them excessively; for though he was Paul, yet he was a man. But this is no charge against Paul, but infirmity of human nature; and it is to the praise of his fixed purpose of mind that when he even dreaded death and stripes, he did nothing wrong because of this fear. … I, for my part, on this account admire him; because being in fear, and not simply in fear, but even in trembling at his perils, he so ran as ever to keep his crown; and gave not in for any danger, in his task of purging out the world, and everywhere both by sea and land sowing the Gospel’.

St John Chrysostom has said it all … may he pray for us, in all our experiences of fear, that in all we may yet keep a steady course, seeking God in all things. May God bless you this day. 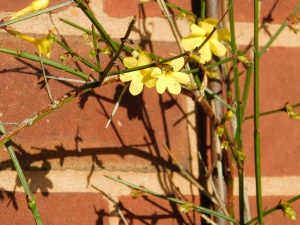