The statue photographed below stands in our parlour, and so is well known to all who visit us. It is faithful to St Bernadette’s vision in all its details.

The first apparition was on 11 February 1858. Bernadette had gone, with her sister and a friend, to collect wood at Massabielle on the banks of the river Gave. To cross the stream, she began removing her footwear and then heard a noise like a gust of wind. Following the sound, she looked towards what is now known as the Grotto. She said: ‘I saw a Lady dressed in white; she wore a white dress, and equally white veils, a blue belt and a yellow rose on each foot’. Bernadette made the sign of the Cross with her and said the Rosary, at the end of which the Lady disappeared. Later, on 25 March 1858, the Lady revealed her name: ‘Que soy era Immaculada Concepciou!’ – ‘I am the Immaculate Conception!’

May the beauty of our Lady bring you great peace and joy today, and may God bless you. 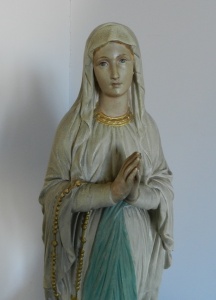