These two saints were brothers, and Byzantine theologians, known as the ‘Apostles to the Slavs’. Pope St John Paul II said of them: ‘The event which was to determine the whole of the rest of their lives was the request made by Prince Rastislav of Greater Moravia to the Emperor Michael III, to send to his peoples “a Bishop and teacher … able to explain to them the true Christian faith in their own language”. Those chosen were Saints Cyril and Methodius, who readily accepted, set out and, probably by the year 863, reached Greater Moravia – a State then including various Slav peoples of Central Europe, at the crossroads of the mutual influences between East and West. … They had in fact prepared well for the task entrusted to them: they took with them the texts of the Sacred Scriptures needed for celebrating the Sacred Liturgy, which they had prepared and translated into the Old Slavonic language and written in a new alphabet, devised by Constantine the Philosopher and perfectly adapted to the sounds of that language. … In Rome Pope Hadrian II, who had in the meantime succeeded Nicholas I, received them very cordially. … This phase of their efforts concluded in a most favourable manner. Methodius however had to carry out the next stages by himself, because his younger brother, now gravely ill, scarcely had time to take religious vows and put on the monastic habit before he died shortly afterwards, on 14 February 869 in Rome. Saint Methodius remained faithful to the words which Cyril had said to him on his deathbed: “Behold, my brother, we have shared the same destiny, ploughing the same furrow; I now fall in the field at the end of my day. I know that you greatly love your Mountain; but do not for the sake of the Mountain give up your work of teaching. For where better can you find salvation?”

We rejoice today in the breadth of the Faith, and pray for the Christians of the East. May Saints Cyril and Methodius pray for us, and may God bless you this day. 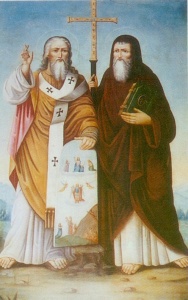