The Cathedral of St Chad, one of the first Cathedrals to be built after the restoration of the Catholic Hierarchy in this country, was built in what was originally the Gun Quarter of the city. There would have been workshops and factories around it, quite different from the roads we see today, which surround it on all sides creating a small island. It replaced a small Georgian chapel. Built in an unusual style, it is instantly recognisable as a Catholic place of worship.

Bede wrote in his ‘Ecclesiastical History’: ‘Three years after the death of King Penda, Immin, and Eafa, and Eadbert, generals of the Mercians, rebelled against King Oswy, setting up for their king, Wulfhere, son to the said Penda, a youth, whom they had kept concealed; and expelling the officers of the foreign king, they at once recovered their liberty and their lands; and being thus free, together with their king; they rejoiced to serve Christ the true King, that they might obtain the everlasting kingdom which is in heaven. This king governed the Mercians seventeen years, and had for his first bishop Trumhere, above spoken of; the second Jaruman; the third Chad; the fourth Winfrid. All these, succeeding each other regularly under King Wulfhere, discharged the episcopal duties to the Mercian nation’. The Mercian kingdom covers the area in which Birmingham is situated and of which Chad was Bishop.

We pray today for Archbishop Bernard Longley, his successor; and may St Chad pray for us also. May his Cathedral be a light shining in the darkness of our current times, and may God bless you. 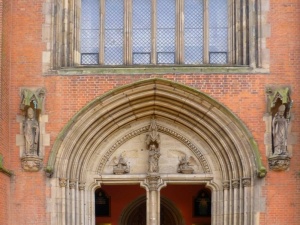