This scene of the Assumption of our Lady dates from the tenth or eleventh century and comes from Constantinople. It shows the Virgin on her deathbed, with our Lord beside her, holding a smaller image of her in His arms. Angels and the Apostles complete the scene.

Here is how Blessed Anne Catherine Emmerich saw it all: ‘After Communion, Mary spoke no more. Her coun­tenance, blooming and smiling as in youth, was raised above. I no longer saw the roof of her chamber, and the lamp appeared to be suspended in the open air. A pathway of light arose from Mary up to the heav­enly Jerusalem, up to the throne of the Most Holy Trinity. On either side of this pathway I saw clouds of light out of which gazed angelic faces. Mary raised her arms to the Heavenly Jerusalem. Her body with all its wrappings was floating so high above the couch that I could see under it. A figure of light, also with upraised arms, appeared to issue from Mary. The two choirs of angels united under this figure and soared up with it, as if separating it from the body, which now sank back upon the couch, the hands crossed upon the breast. Many holy souls, among whom I recognised Joseph, Anne, Joachim, John the Baptist, Zachary, and Elizabeth, came to meet her. But up she soared, followed by them, to her Son, whose Wounds were flashing light far more brilliant than that which surrounded Him. He received her and placed in her hand a sceptre, point­ing at the same time over the whole circumference of the earth. At last I saw, and the sight filled me with joy, a multitude of souls released from Purga­tory and soaring up to Heaven, and I received the surety that every year, on the feast of Mary’s Assump­tion, many of her devout clients are freed from Pur­gatory. The hour of Mary’s death was made known to me as that of None, at which time also Jesus had died on the cross. Peter and John likewise must have seen the glory of Mary’s blessed soul, for their faces were turned upward, but the other Apostles were kneeling bowed to the ground’.

As we rejoice today in this glorious Solemnity, we pray for all those whose paths are ‘hard and difficult’. That the Virgin Mother of God may ease their way, bringing them comfort, light and hope. May God bless you and may you feel the presence of our Lady close to you. 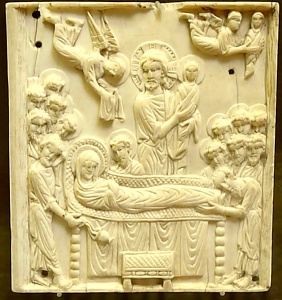