St Clement of Rome, third successor to St Peter, wrote of angels: ‘Let us think of the whole host of angels, how they stand by and serve his will, for Scriptures say: “Ten thousand times ten thousand were doing service to him, and they cried out: Holy, holy, holy, Lord Sabaoth; the whole of creation is full of His glory.” Then let us gather together in awareness of our concord, as with one mouth we shout earnestly to him that we may become sharers in his great and glorious promises’.

We may think here of Isaiah’s vision: ‘In the year that King Uzziah died I saw the Lord sitting upon a throne, high and lifted up; and his train filled the temple. Above him stood the seraphim; each had six wings: with two he covered his face, and with two he covered his feet, and with two he flew. And one called to another and said: “Holy, holy, holy is the Lord of hosts; the whole earth is full of his glory.” And the foundations of the thresholds shook at the voice of him who called, and the house was filled with smoke’.

St Michael, Prince of the Archangels, has a special role in relation to the battle against evil, and also with the dying soul. May he be close to all who need him this day, and may God bless you and give you much joy in the angels this day. 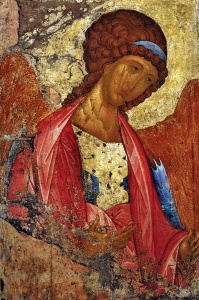