Here is today’s New Testament reading, the marvellous hymn from Philippians: ‘Have this mind among yourselves, which was in Christ Jesus, who, though he was in the form of God, did not count equality with God a thing to be grasped, but emptied himself, taking the form of a servant, being born in the likeness of men. And being found in human form he humbled himself and became obedient unto death, even death on a cross. Therefore God has highly exalted him and bestowed on him the name which is above every name, that at the name of Jesus every knee should bow, in heaven and on earth and under the earth, and every tongue confess that Jesus Christ is Lord, to the glory of God the Father’.

As a comment upon this text, and as a way to imitate the Lord, we offer the following from the Rule of St Benedict: ‘Wherefore, brethren, if we wish to attain to the summit of humility and desire to arrive speedily at that heavenly exaltation to which we ascend by the humility of the present life, then must we set up a ladder of our ascending actions like unto that which Jacob saw in his vision, whereon angels appeared to him, descending and ascending. By that descent and ascent we must surely understand nothing else than this, that we descend by self-exaltation and ascend by humility. And the ladder erected is our life in this world, which for the humble of heart is raised up by the Lord unto heaven. Now the sides of this ladder we call our body and soul, into which sides our divine vocation has fitted various degrees of humility and discipline which we have to climb’.

May God enable us, by His Spirit, along this way of humility, and may He bless us all. 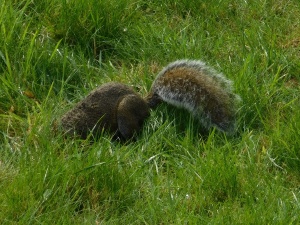