Here is an extract from the Encyclical of Pope Pius XI, given in 1925, to establish the Feast of the Kingship of Christ: ‘It has long been a common custom to give to Christ the metaphorical title of “King,” because of the high degree of perfection whereby he excels all creatures. So he is said to reign “in the hearts of men,” both by reason of the keenness of his intellect and the extent of his knowledge, and also because he is very truth, and it is from him that truth must be obediently received by all mankind. He reigns, too, in the wills of men, for in him the human will was perfectly and entirely obedient to the Holy Will of God, and further by his grace and inspiration he so subjects our free-will as to incite us to the most noble endeavours. He is King of hearts, too, by reason of his “charity which exceedeth all knowledge.” And his mercy and kindness which draw all men to him, for never has it been known, nor will it ever be, that man be loved so much and so universally as Jesus Christ’.

The words of the hymn ‘The King of Love my Shepherd is, whose goodness faileth never’ come to mind. May He, the King of Love, rule in our hearts and minds, in our nations, and in our world. May He bless us all this day. 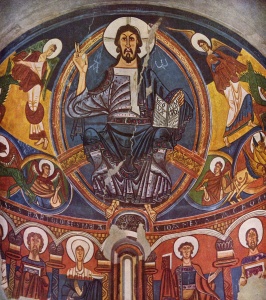