Blessed Anne Catherine Emmerich, 8 September 1774 – 9 February 1824, saw the Immaculate Conception of the Virgin in this way: ‘I saw Joachim and Anne embrace each other in ecstasy. They were surrounded by hosts of angels, some floating over them carrying a luminous tower like that which we see in the pictures of the Litany of Loretto. The tower vanished between Joachim and Anne, both of whom were encompassed by brilliant light and glory. At the same moment the heavens above them opened, and I saw the joy of the Most Holy Trinity and of the angels over the Conception of Mary. Both Joachim and Anne were in a super­natural state. I learned that, at the moment in which they embraced and the light shone around them, the Immaculate Conception of Mary was accomplished. I was also told that Mary was conceived just as con­ception would have been effected, were it not for the fall of man’.

The painting by Giotto shows the couple embracing at the Golden Gate in Jerusalem. The faces of the onlookers are filled with joy.

May that joy fill our hearts also, as we celebrate the feast, and may God bless you this day. 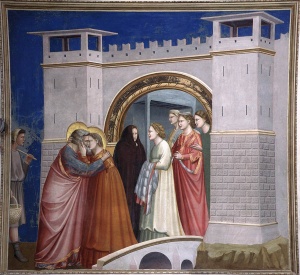