From today’s Gospel, from St John: ‘Nathanael answered him, “Rabbi, you are the Son of God! You are the King of Israel!” Jesus answered him, “Because I said to you, I saw you under the fig tree, do you believe? You shall see greater things than these.” And he said to him, “Truly, truly, I say to you, you will see heaven opened, and the angels of God ascending and descending upon the Son of man.”’

The passage recalls Jacob: ‘Jacob left Beer-sheba, and went toward Haran. And he came to a certain place, and stayed there that night, because the sun had set. Taking one of the stones of the place, he put it under his head and lay down in that place to sleep. And he dreamed that there was a ladder set up on the earth, and the top of it reached to heaven; and behold, the angels of God were ascending and descending on it!’.

And to bring it down to our level, here is St Benedict: ‘Wherefore, brethren, if we wish to attain to the summit of humility and desire to arrive speedily at that heavenly exaltation to which we ascend by the humility of the present life, then must we set up a ladder of our ascending actions like unto that which Jacob saw in his vision, whereon angels appeared to him, descending and ascending. By that descent and ascent we must surely understand nothing else than this, that we descend by self-exaltation and ascend by humility. And the ladder erected is our life in this world, which for the humble of heart is raised up by the Lord unto heaven. Now the sides of this ladder we call our body and soul, into which sides our divine vocation has fitted various degrees of humility and discipline which we have to climb’.

May we truly learn the ways of ascent and descent, in our own ordinary lives. May God’s grace and blessing be with you this day. 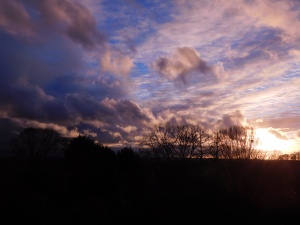