Today’s saint is closely associated with the spiritual life of this region, which he is said to have evangelised in the seventh century.

When Chad was appointed Bishop in the ancient kingdom of Mercia, Bede relates that ‘He had his episcopal see in the place called Lichfield, in which he also died, and was buried, and where the see of the succeeding bishops of that province still continues. He had built himself a habitation not far from the church, wherein he was wont to pray and read with seven or eight of the brethren, as often as he had any spare time from the labour and ministry of the word’.

Prayer, study, ministry of the Word: a programme for us all. May St Chad pray for us in our own way of life, especially in the challenges of the pandemic, and may God bless you. 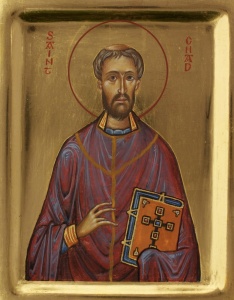