In our monastery, we are keeping the transferred Feast of the Passing of our Holy Father St Benedict. Here, from the pen of St Gregory the Great, is the account of St Benedict’s death: ‘The same year in which he departed out of this life, he foretold the day of his most holy death to some of his disciples who conversed with him, and to others who were far off, giving strict charge to those who were present to keep in silence what they had heard, and declaring to the absent by what sign they should know when his soul departed out of his body. Six days before his departure he caused his grave to be opened, and immediately after he fell into a fever, by the violence whereof his strength began to wax faint, and the infirmity daily increasing, the sixth day he caused his disciples to carry him into the Oratory, where he did arm himself for his going forth by receiving the Body and Blood of the Lord; then, supporting his weak limbs by the hands of his disciples, he stood up, his hands lifted towards Heaven, and with words of prayer at last breathed forth his soul. The same day two of his Brethren, the one living in the Monastery and the other in a place far remote, had a revelation in one and the self-same manner. For they beheld a way, spread with garments and shining with innumerable lamps, stretching directly eastwards from his cell up to Heaven; a man of venerable aspect stood above and asked them whose way that was. But they professing they knew not, he said to them: “This is the way by which the beloved of the Lord, Benedict, ascended.” Thus the disciples who were present knew of the death of the holy man, and so also those who were absent understood it by the sign foretold them. He was buried in the Oratory of St. John the Baptist which he himself had built upon the ruins of Apollo’s altar’.

‘Benedict, the beloved of the Lord’ … this is how we know that great, yet humble, man of God. May he pray for us, and may God bless you this day. 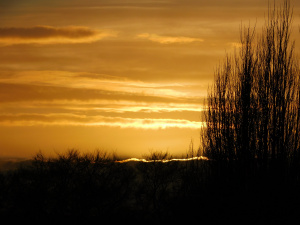