For today, the earliest account of the Institution of the Holy Eucharist, which comes to us from St Paul: ‘For I received from the Lord what I also delivered to you, that the Lord Jesus on the night when he was betrayed took bread, and when he had given thanks, he broke it, and said, “This is my body which is for you. Do this in remembrance of me.” In the same way also the cup, after supper, saying, “This cup is the new covenant in my blood. Do this, as often as you drink it, in remembrance of me.” For as often as you eat this bread and drink the cup, you proclaim the Lord’s death until he comes’.

Here is St Augustine: ‘I am not unmindful of the promise by which I pledged myself to deliver a sermon to instruct you, who have just been baptised, on the Sacrament of the Lord’s table, which you now look upon and of which you partook last night. You ought to know what you have received, what you are going to receive, and what you ought to receive daily. That Bread which you see on the altar, consecrated by the word of God, is the Body of Christ. That chalice, or rather, what the chalice holds, consecrated by the word of God, is the Blood of Christ. Through those accidents the Lord wished to entrust to us His Body and the Blood which He poured out for the remission of sins. If you have received worthily, you are what you have received, for the Apostle says: The bread is one; we though many, are one body …’

As we accompany the Lord on his journey to the Cross, we do so strengthened by His own Body and Blood. ‘You are what you have received’. May God bless you in all that you undertake for Him. 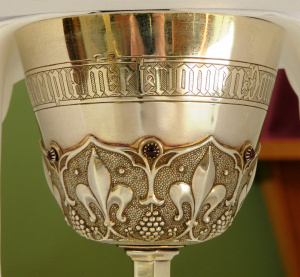