Here is today’s Gospel, continuing from St John: ‘For God so loved the world that he gave his only Son, that whoever believes in him should not perish but have eternal life. For God sent the Son into the world, not to condemn the world, but that the world might be saved through him. He who believes in him is not condemned; he who does not believe is condemned already, because he has not believed in the name of the only Son of God. And this is the judgment, that the light has come into the world, and men loved darkness rather than light, because their deeds were evil. For everyone who does evil hates the light, and does not come to the light, lest his deeds should be exposed. But he who does what is true comes to the light, that it may be clearly seen that his deeds have been wrought in God’.

Pope Benedict XVI, in his very first Encyclical, ‘Deus Caritas Est’, wrote: ‘Being Christian is not the result of an ethical choice or a lofty idea, but the encounter with an event, a person, which gives life a new horizon and a decisive direction. Saint John’s Gospel describes that event in these words: “God so loved the world that he gave his only Son, that whoever believes in him should … have eternal life”. … Since God has first loved us, love is now no longer a mere “command”; it is the response to the gift of love with which God draws near to us’.

As the poet T.S. Eliot wrote, ‘With the drawing of this Love and the voice of this Calling’ – in turn a quotation from the text ‘The Cloud of Unknowing’. May we respond ever more profoundly to this Love and be transformed ever more closely to His Likeness. May God bless you this day. 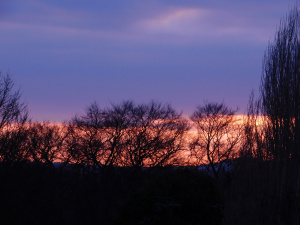