Here is the first part of the High Priestly prayer of Jesus, of which a section is given to us for our Gospel reading today: ‘When Jesus had spoken these words, he lifted up his eyes to heaven and said, “Father, the hour has come; glorify thy Son that the Son may glorify thee, since thou hast given him power over all flesh, to give eternal life to all whom thou hast given him. And this is eternal life, that they know thee the only true God, and Jesus Christ whom thou hast sent. I glorified thee on earth, having accomplished the work which thou gavest me to do; and now, Father, glorify thou me in thy own presence with the glory which I had with thee before the world was made.’

St Augustine commented: ‘The glorification of the Son by the Father is understood by some to consist in this, that He spared Him not, but delivered Him up for us all. But if we say that He was glorified by His passion, how much more was He so by His resurrection! For in His passion our attention is directed more to His humility than to His glory, in accordance with the testimony of the apostle, who says, He humbled Himself, and became obedient unto death, even the death of the cross: and then he goes on to say of His glorification, Wherefore God also has highly exalted Him, and given Him a name which is above every name: that in the name of Jesus every knee should bow, of things in heaven, and things in earth, and things under the earth; and that every tongue should confess that the Lord Jesus Christ is in the glory of God the Father. This is the glorification of our Lord Jesus Christ, that took its commencement from His resurrection. … He was first humbled by suffering; for had He not died, He would not have risen from the dead. Humility is the earning of glory; glory, the reward of humility’.

In these days, may we enter at depth into the prayer of Jesus, at this most crucial time both for Him and for us, that we may we more truly united to Him in all, whatever that may be. And may He bless us all this day. 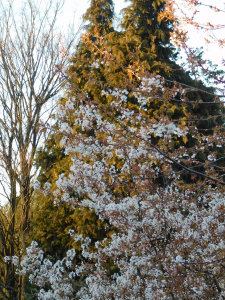