Here is part of the Gospel for today, from Luke. It tells the story of John’s birth, and includes the text of the Benedictus: ‘Now the time came for Elizabeth to be delivered, and she gave birth to a son. And her neighbours and kinsfolk heard that the Lord had shown great mercy to her, and they rejoiced with her. And on the eighth day they came to circumcise the child; and they would have named him Zechariah after his father, but his mother said, “Not so; he shall be called John.” And they said to her, “None of your kindred is called by this name.” And they made signs to his father, inquiring what he would have him called. And he asked for a writing tablet, and wrote, “His name is John.” And they all marvelled. And immediately his mouth was opened and his tongue loosed, and he spoke, blessing God. And fear came on all their neighbours. And all these things were talked about through all the hill country of Judea; and all who heard them laid them up in their hearts, saying, “What then will this child be?” For the hand of the Lord was with him. And his father Zechariah was filled with the Holy Spirit, and prophesied, saying, “Blessed be the Lord God of Israel, for he has visited and redeemed his people …’

St Ambrose commented; ‘Zechariah in turn is questioned by signs; but as his lack of faith deprived him of speech and hearing, he could not express himself in a loud voice, he did so by hand and by writing; for “he wrote these words: John is his name”: by which the name is not given but attested. And it is right that at once his tongue was loosed: chained by unbelief, faith loosed it. So, too, let us believe in order to speak so that our language, chained by the bonds of unbelief, will be loosed into spiritual words. Let us write in spirit the mysteries if we want to speak; Let us write the messenger of Christ “not on tablets of stone, but on the tables of flesh of our heart”’.

‘I believed, and therefore will I speak …’ – thus sang the Psalmist. May we, too, believe, and therefore speak, as did Zechariah. May God bless you this day, and may the fervour and dedication of St John the Baptist accompany you in all your labour for Christ. 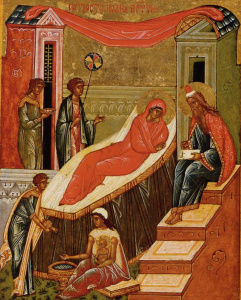