‘A man came from Baal-shalishah, bringing the man of God bread of the first fruits, twenty loaves of barley, and fresh ears of grain in his sack. And Elisha said, “Give to the men, that they may eat.” But his servant said, “How am I to set this before a hundred men?” So he repeated, “Give them to the men, that they may eat, for thus says the Lord, ‘They shall eat and have some left.’” So he set it before them. And they ate, and had some left, according to the word of the Lord’.

This texts forms our Old Testament reading, and it prefigures clearly the Gospel reading, which is the Feeding of the Five Thousand: ‘Jesus said to Philip, “How are we to buy bread, so that these people may eat?” This he said to test him, for he himself knew what he would do. 7 Philip answered him, “Two hundred denarii would not buy enough bread for each of them to get a little.” One of his disciples, Andrew, Simon Peter’s brother, said to him, “There is a lad here who has five barley loaves and two fish; but what are they among so many?” Jesus said, “Make the people sit down.” Now there was much grass in the place; so the men sat down, in number about five thousand. Jesus then took the loaves, and when he had given thanks, he distributed them to those who were seated; so also the fish, as much as they wanted. And when they had eaten their fill, he told his disciples, “Gather up the fragments left over, that nothing may be lost.” So they gathered them up and filled twelve baskets with fragments from the five barley loaves, left by those who had eaten’.

This in turn prefigures the Eucharist, the ‘Holy Bread of Eternal Life’. God’s providence knows no bounds; may we always trust Him, in His mysterious ways – and may God bless you. 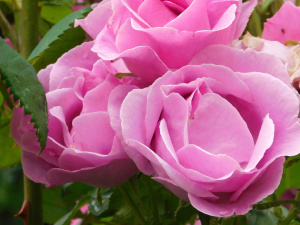