From our Old Testament reading, from the First Book of the Kings: ‘He himself [Elijah] went a day’s journey into the wilderness, and came and sat down under a broom tree; and he asked that he might die, saying, “It is enough; now, O Lord, take away my life; for I am no better than my fathers.” And he lay down and slept under a broom tree; and behold, an angel touched him, and said to him, “Arise and eat.” And he looked, and behold, there was at his head a cake baked on hot stones and a jar of water. And he ate and drank, and lay down again. And the angel of the Lord came again a second time, and touched him, and said, “Arise and eat, else the journey will be too great for you.” And he arose, and ate and drank, and went in the strength of that food forty days and forty nights to Horeb the mount of God’.

St Teresa Benedicta of the Cross, whose feast day is tomorrow, reflected profoundly on the prophet Elijah. Here is part of her writing: ‘He stood before God’s face because this was the eternal treasure for whose sake he gave up all earthly goods. He had no house; he lived wherever the Lord directed him from moment to moment: in loneliness beside the brook of Carith, in the little house of the poor widow of Zarephath of Sidon, or in the caves of Mount Carmel. His clothing was an animal hide like that of that other great penitent and prophet, the Baptist. … Elijah is not concerned about his daily bread. He lives trusting in the solicitude of the heavenly Father and is marvellously sustained. A raven brings him his daily food while he is in solitude. The miraculously increased provisions of the pious widow nourish him in Zarephath. Prior to the long trek to the holy mountain where the Lord was to appear to him, an angel with heavenly bread strengthens him’.

May we, too, stand in our poverty before the face of the living God, and know His mercy in our lives. May He bless you this day and always. 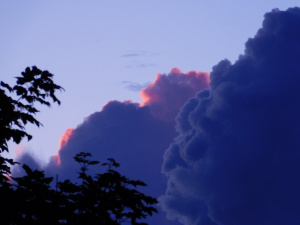