Today the Church rejoices with great joy, celebrating a feast which has been kept from earliest times. Here is an extract from the Apostolic Constitution of Pope Pius XII, in which he established the dogma: ‘Since the universal Church, within which dwells the Spirit of Truth who infallibly directs it toward an ever more perfect knowledge of the revealed truths, has expressed its own belief many times over the course of the centuries, and since the bishops of the entire world are almost unanimously petitioning that the truth of the bodily Assumption of the Blessed Virgin Mary into heaven should be defined as a dogma of divine and Catholic faith–this truth which is based on the Sacred Writings, which is thoroughly rooted in the minds of the faithful, which has been approved in ecclesiastical worship from the most remote times, which is completely in harmony with the other revealed truths, and which has been expounded and explained magnificently in the work, the science, and the wisdom of the theologians – we believe that the moment appointed in the plan of divine providence for the solemn proclamation of this outstanding privilege of the Virgin Mary has already arrived. … By the authority of our Lord Jesus Christ, of the Blessed Apostles Peter and Paul, and by our own authority, we pronounce, declare, and define it to be a divinely revealed dogma: that the Immaculate Mother of God, the ever Virgin Mary, having completed the course of her earthly life, was assumed body and soul into heavenly glory’.

May our blessed Mother watch over us all, and her Son bless us. 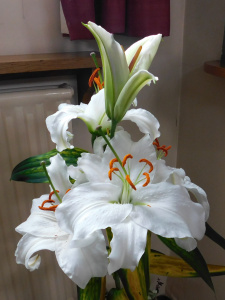