In his 1987 Encyclical, ‘Redemptoris Mater’, Pope St John Paul II wrote: ‘Even though it is not possible to establish an exact chronological point for identifying the date of Mary’s birth, the Church has constantly been aware that Mary appeared on the horizon of salvation history before Christ. It is a fact that when “the fullness of time” was definitively drawing near-the saving advent of Emmanuel- she who was from eternity destined to be his Mother already existed on earth. The fact that she “preceded” the coming of Christ is reflected every year in the liturgy of Advent. Therefore, if to that ancient historical expectation of the Saviour we compare these years which are bringing us closer to the end of the second Millennium after Christ and to the beginning of the third, it becomes fully comprehensible that in this present period we wish to turn in a special way to her, the one who in the “night” of the Advent expectation began to shine like a true “Morning Star” (Stella Matutina). For just as this star, together with the “dawn,” precedes the rising of the sun, so Mary from the time of her Immaculate Conception preceded the coming of the Saviour, the rising of the “Sun of Justice” in the history of the human race’.

And St Bernard: ‘O you, whoever you are, who feel that in the tidal wave of this world you are nearer to being tossed about among the squalls and gales than treading on dry land: if you do not want to founder in the tempest, do not avert your eyes from the brightness of this star. When the wind of temptation blows up within you, when you strike upon the rock of tribulation, gaze up at this star, call out to Mary’.

May Our Lady pray for us, in all the tribulations of our lives, and may her Son bless you richly this day. 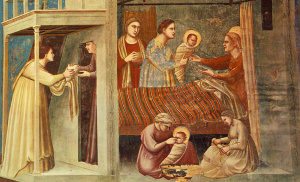