It is thought that St Matthew wrote his Gospel in Aramaic or Hebrew, not Greek. Here is St Irenaeus of Lyons, writing in about the year 180: ‘Matthew also issued a written Gospel among the Hebrews in their own dialect, while Peter and Paul were preaching in Rome and laying the foundation of the Church. After their departure, Mark, the disciple and interpreter of Peter, did also hand down to us in writing what had been preached by Peter. Luke also, the companion of Paul, recorded in a book the Gospel preached by him. Afterwards John, the disciple of the Lord, who also had leaned upon his breast, did himself publish a Gospel during his residence at Ephesus in Asia’.

From earliest times, then, the Gospel has reached out to people in their own language – whether Hebrew, Aramaic, Greek, Latin (St Jerome), the languages of the time; and later on, translations were made into every tongue spoken upon earth.

The Word heard with the ear enters the heart, and encounter with the living God is effected, with ‘fruit that shall last’. May we truly receive this Word in our own hearts, and may It bear fruit in our lives. May God bless you. 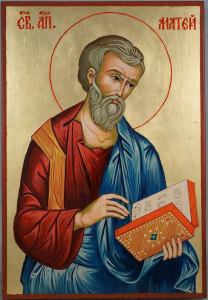