Part of today’s Old Testament reading, from the Book of Daniel, is a text closely associated with the Kingship of Christ: ‘Thrones were placed and one that was Ancient of Days took his seat; his raiment was white as snow, and the hair of his head like pure wool; his throne was fiery flames, its wheels were burning fire. A stream of fire issued and came forth from before him; a thousand thousands served him, and ten thousand times ten thousand stood before him … and behold, with the clouds of heaven there came one like a Son of Man, and he came to the Ancient of Days and was presented before him. And to him was given dominion and glory and kingdom, that all peoples, nations, and languages should serve him; his dominion is an everlasting dominion, which shall not pass away, and his kingdom one that shall not be destroyed.’

St Jerome commented: ‘We read something similar in John’s Apocalypse: “After these things I was immediately in the Spirit, and lo, a throne was set up in heaven, and one was seated upon the throne; and He who sat upon it had the likeness of jasper and sardine stone, and there was a rainbow round about the throne like the appearance of emerald. … And the Ancient of Days is the One who, according to John sits alone upon His throne. Likewise the Son of Man, who came unto the Ancient of Days, is the same as He who, according to John, is called the Lion of the tribe of Judah, the Root of David, and the titles of that sort. … All that is said here concerning His being brought before Almighty God and receiving authority and honor and royal power is to be understood in the light of the Apostle’s statement: “Who, although He was in the form of God, thought it not robbery to be equal with God; but emptied Himself, taking the form of a servant, being made in the likeness of men, and was found in His condition to be as a man: He humbled Himself, becoming obedient unto death, even to the death of the cross.”’

His Kingdom is founded upon humility and gentleness, and He invites us to the same qualities. May we be ever more open to them, and may God bless you this day. 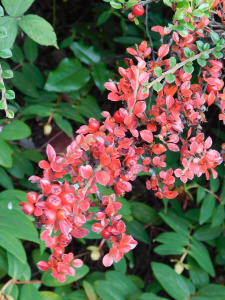