From St Matthew: ‘Now when Jesus was born in Bethlehem of Judea in the days of Herod the king, behold, wise men from the East came to Jerusalem, saying, “Where is he who has been born king of the Jews? For we have seen his star in the East, and have come to worship him.”’

St John Chrysostom commented: ‘Let us then also follow the magi, … that we may see Christ, since they too, had they not been far from their own country, would have missed seeing Him. Let us depart from the things of earth. For so the wise men, while they were in Persia, saw but the star, but after they had departed from Persia, they beheld the Sun of Righteousness. Or rather, they would not have seen so much as the star, unless they had readily risen up from thence. Let us then also rise up; though all men be troubled, let us run to the house of the young Child; though kings, though nations, though tyrants interrupt this our path, let not our desire pass away. … Before seeing the young Child, fears and dangers and troubles pressed upon them from every side; but after the adoration, it is calm and security …’

May God bless you abundantly this Epiphany, and may your encounter with the Christ Child be deep, and real, and filled with adoration. 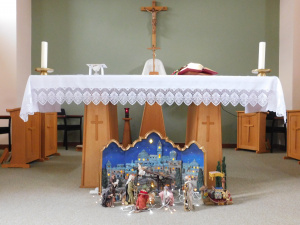