Today is also the Optional Memoria of the early Christian martyrs, Saints Perpetua and Felicitas.

Here is part of the account of Perpetua’s martyrdom, where she understands what will befall her: ‘I saw a golden ladder of marvellous height, reaching up even to heaven, and very narrow, so that persons could only ascend it one by one; and on the sides of the ladder was fixed every kind of iron weapon. There were swords, lances, hooks, daggers; so that if anyone went up carelessly, or not looking upwards, he would be torn to pieces and his flesh would cleave to the iron weapons. And under the ladder itself was crouching a dragon of wonderful size, who lay in wait for those who ascended, and frightened them from the ascent. And Saturus [her brother] went up first, who had subsequently delivered himself up freely on our account, not having been present at the time that we were taken prisoners. And he attained the top of the ladder, and turned towards me, and said to me, “Perpetua, I am waiting for you; but be careful that the dragon do not bite you.” And I said, “In the name of the Lord Jesus Christ, he shall not hurt me.” And from under the ladder itself, as if in fear of me, he slowly lifted up his head; and as I trod upon the first step, I trod upon his head. And I went up, and I saw an immense extent of garden, and in the midst of the garden a white-haired man sitting in the dress of a shepherd, of a large stature, milking sheep; and standing around were many thousand white-robed ones. And he raised his head, and looked upon me, and said to me, “Thou are welcome, daughter.” And he called me, and from the cheese as he was milking, he gave me as it were a little cake, and I received it with folded hands; and I ate it, and all who stood around said “Amen”. And at the sound of their voices I was awakened, still tasting a sweetness which I cannot describe. And I immediately related this to my brother, and we understood that it was to be a passion, and we ceased henceforth to have any hope in this world’.

Today, many are being tried and tested for the Faith, and indeed are being killed. May these saints comfort them and strengthen them through their intercession, and may God bless you in your own witness. 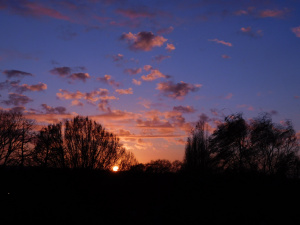