Pope Benedict XVI visited Nazareth in 2009. There, he was able to pray at the Shrine of the Annunciation. Afterwards, he offered a reflection. Here is part of it: ‘What happened here in Nazareth, far from the gaze of the world, was a singular act of God, a powerful intervention in history, through which a child was conceived who was to bring salvation to the whole world. The wonder of the Incarnation continues to challenge us to open up our understanding to the limitless possibilities of God’s transforming power, of his love for us, his desire to be united with us. Here the eternally begotten Son of God became man, and so made it possible for us, his brothers and sisters, to share in his divine sonship. That downward movement of self-emptying love made possible the upward movement of exaltation in which we too are raised to share in the life of God himself.

The ’emptiness’ of Fra Angelico’s fresco painting is a visible reminder of that ‘self-emptying’ of God. The Trinity, too, is gently referred to in the triple arches at the rear of the scene. Mary’s humility is emphasised, as is that of Gabriel, who stands before her in utter simplicity. The light between and behind them grows.

‘Ecce Ancilla Domini’ is Mary’s response; it is our Community’s motto, which we seek to fulfil at all times and in all places. May you too be drawn into this bright circle of light, love and obedience, and may God bless you this day. 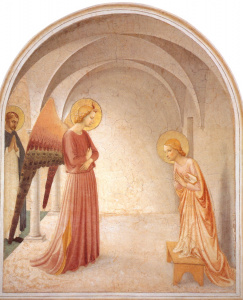