Pope St John Paul II said in his document ‘Dives in Misericordia’: ‘The messianic message of Christ and His activity among people end with the cross and resurrection. We have to penetrate deeply into this final event … if we wish to express in depth the truth about mercy, as it has been revealed in depth in the history of our salvation. … If, in fact, the reality of the Redemption, in its human dimension, reveals the unheard-of greatness of man, … at the same time, the divine dimension of the redemption enables us, I would say, … to uncover the depth of that love which does not recoil before the extraordinary sacrifice of the Son, in order to satisfy the fidelity of the Creator and Father towards human beings, created in His image and chosen from “the beginning,” in this Son, for grace and glory’.

As we approach the Sacred Triduum, the mighty acts by which we were redeemed, we remember that the Face of Christ upon the Cross is above all the Face of mercy. May this mercy enfold us in these days, and may much blessing come upon us through walking the path of the Passion. 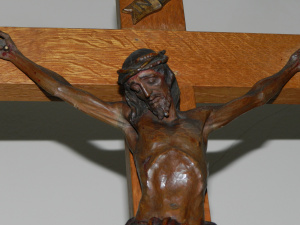