Here are some words of St John Henry Newman, taken from his Stations of the Cross: ‘Yes, they set up the Cross on high, and they placed a ladder against it, and, having stripped Him of His garments, made Him mount. With His hands feebly grasping its sides and cross-woods, and His feet slowly, uncertainly, with much effort, with many slips, mounting up, the soldiers propped Him on each side, or He would have fallen. When He reached the projection where His sacred feet were to be, He turned round with sweet modesty and gentleness towards the fierce rabble, stretching out His arms, as if He would embrace them. Then He lovingly placed the backs of His hands close against the transverse beam, waiting for the executioners to come with their sharp nails and heavy hammers to dig into the palms of His hands, and to fasten them securely to the wood. There He hung, a perplexity to the multitude, a terror to evil spirits, the wonder, the awe, yet the joy, the adoration of the Holy Angels’.

‘O mighty work of mercy! Death then died when Life died on the Tree’. By the Cross and Passion of the Lord, may peace come to our world. May God bless you. 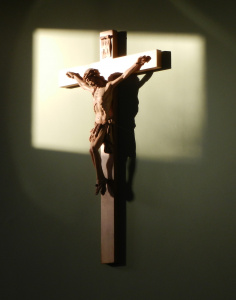