Here is part of today’s Gospel, from John: ‘Mary stood weeping outside the tomb, and as she wept she stooped to look into the tomb; and she saw two angels in white, sitting where the body of Jesus had lain, one at the head and one at the feet. They said to her, “Woman, why are you weeping?” She said to them, “Because they have taken away my Lord, and I do not know where they have laid him.” Saying this, she turned round and saw Jesus standing, but she did not know that it was Jesus. Jesus said to her, “Woman, why are you weeping? Whom do you seek?” Supposing him to be the gardener, she said to him, “Sir, if you have carried him away, tell me where you have laid him, and I will take him away.” Jesus said to her, “Mary.”’

St John Chrysostom commented: ‘By all these circumstances, as though a door was being opened for her, she was led little by little to the knowledge of the Resurrection. And the manner of their sitting invited her to question them, for they showed that they knew what had taken place; on which account they did not sit together either, but apart from one another. For because it was not likely that she would dare at once to question them, both by questioning her, and by the manner of their sitting, they bring her to converse. What then says she? She speaks very warmly and affectionately: “They have taken away my Lord, and I know not where they have laid Him”. And when she had thus said, she turned herself back. And by what kind of consequence is it, that she having spoken to them, and not having yet heard anything from them, turned back? Methinks that while she was speaking, Christ suddenly appearing behind her, struck the Angels with awe; and that they having beheld their Ruler, showed immediately by their bearing, their look, their movements, that they saw the Lord; and this drew the woman’s attention, and caused her to turn herself backwards. To them then He appeared on this wise, but not so to the woman, in order not at the first sight to terrify her, but in a meaner and ordinary form’.

Here, even in the Resurrection, the Lord show His mercy and compassion. As we rejoice in the new life of aster, let us also rejoice in His great compassion for us in our weakness. May God bless you this day, and may He show His loving kindness to you. 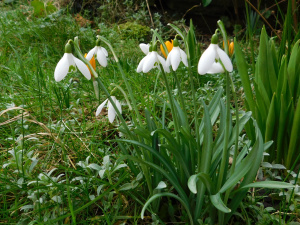