Today, we hear the Emmaus story at Mass, with these lines: ‘So they drew near to the village to which they were going. He appeared to be going further, but they constrained him, saying, “Stay with us, for it is toward evening and the day is now far spent.” So he went in to stay with them. When he was at table with them, he took the bread and blessed, and broke it, and gave it to them. And their eyes were opened and they recognized him; and he vanished out of their sight. They said to each other, “Did not our hearts burn within us while he talked to us on the road, while he opened to us the scriptures?” And they rose that same hour and returned to Jerusalem; and they found the eleven gathered together and those who were with them, who said, “The Lord has risen indeed, and has appeared to Simon!” Then they told what had happened on the road, and how he was known to them in the breaking of the bread.

Pope St Leo the Great wrote: ‘During these days, the Lord joined two of his disciples as their companion on the road, and by chiding them for their timidity and hesitant fears he swept away all the clouds of our uncertainty. Their lukewarm hearts were fired by the light of faith and began to burn within them as the Lord opened up the Scriptures. And as they shared their meal with him, their eyes were opened in the breaking of bread …’

Their eyes were opened to behold their Lord in His resurrected body, and they worshipped Him. As we too share in the Eucharist, may we love and adore our risen Lord, praying that His risen life may give life to our own souls also; and may God bless you this day. 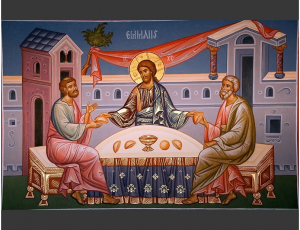