Our New Testament reading today is the conversion of St Paul. Here is part of the account: ‘Saul, still breathing threats and murder against the disciples of the Lord, went to the high priest and asked him for letters to the synagogues at Damascus, so that if he found any belonging to the Way, men or women, he might bring them bound to Jerusalem. Now as he journeyed he approached Damascus, and suddenly a light from heaven flashed about him. And he fell to the ground and heard a voice saying to him, “Saul, Saul, why do you persecute me?” And he said, “Who are you, Lord?” And he said, “I am Jesus, whom you are persecuting; but rise and enter the city, and you will be told what you are to do.” The men who were travelling with him stood speechless, hearing the voice but seeing no one. Saul arose from the ground; and when his eyes were opened, he could see nothing; so they led him by the hand and brought him into Damascus. And for three days he was without sight, and neither ate nor drank’. And once in Damascus, ‘In the synagogues immediately he proclaimed Jesus, saying, “He is the Son of God.”’

St John Chrysostom commented: ‘And straightway, it says, in the synagogues he preached Jesus — not that He is risen — not this: no, nor that He lives: but what? Immediately he strictly expounded the doctrine — that this is the Son of God. And all that heard him were amazed. They were reduced to utter incredulity. And yet they ought not to have wondered only, but to worship and reverence.

May our own response this day be one of worship and reverence, and recognition that the Risen Jesus is indeed the Son of God. May God bless you this day. 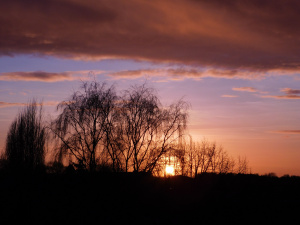