Continuing with Acts, here is part of today’s Mass reading: ‘Now there was at Joppa a disciple named Tabitha, which means Dorcas or Gazelle. She was full of good works and acts of charity. In those days she fell sick and died; and when they had washed her, they laid her in an upper room. Since Lydda was near Joppa, the disciples, hearing that Peter was there, sent two men to him entreating him, “Please come to us without delay.” So Peter rose and went with them. And when he had come, they took him to the upper room. All the widows stood beside him weeping, and showing coats and garments which Dorcas made while she was with them. But Peter put them all outside and knelt down and prayed; then turning to the body he said, “Tabitha, rise.” And she opened her eyes, and when she saw Peter she sat up’.

This story is in many ways reminiscent of the healing of Jairus’ daughter. Here is St Mark’s account: ‘When they came to the house of the ruler of the synagogue, he saw a tumult, and people weeping and wailing loudly. And when he had entered, he said to them, “Why do you make a tumult and weep? The child is not dead but sleeping.” And they laughed at him. But he put them all outside, and took the child’s father and mother and those who were with him, and went in where the child was. Taking her by the hand he said to her, “Talitha cumi”; which means, “Little girl, I say to you, arise.” And immediately the girl got up and walked; for she was twelve years old’.

Tabitha, rise; little girl, arise … both of these are ‘resurrection’ moments; each one rises to a new life; ‘the old has passed away, behold, the new has come.

In these days, as we live our own resurrection in the power of the Risen Christ, let us hold in our hearts those who, through pain and suffering in this life, still await that new life which is promised us. May God bless you this day. 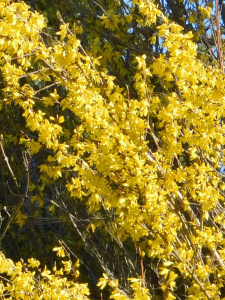