Today is also the Optional Memoria of St Alban, Protomartyr of England, and the saint after whom the city of St Albans is named.

Here is part of Bede’s account of what happened: ‘Alban, being yet a pagan, at the time when the cruelties of wicked princes were raging against Christians, gave entertainment in his house to a certain clergyman, flying from the persecutors. This man he observed to be engaged in continual prayer and watching day and night; when on a sudden the Divine grace shining on him, he began to imitate the example of faith and piety which was set before him, and being gradually instructed by his wholesome admonitions, he cast off the darkness of idolatry, and became a Christian in all sincerity of heart. The aforesaid clergyman having been some days entertained by him, it came to the ears of the wicked prince, that this holy confessor of Christ, whose time of martyrdom had not yet come, was concealed at Alban’s house. Whereupon he sent some soldiers to make a strict search after him. When they came to the martyr’s house, St Alban immediately presented himself to the soldiers, instead of his guest and master, in the habit or long coat which he wore, and was led bound before the judge. … St. Alban, who had voluntarily declared himself a Christian to the persecutors of the faith, was not at all daunted at the prince’s threats, but putting on the armour of spiritual warfare, publicly declared that he would not obey the command. … The judge, hearing these words, and being much incensed, ordered this holy confessor of God to be scourged by the executioners … He, being most cruelly tortured, bore the same patiently, or rather joyfully, for our Lord’s sake. When the judge perceived that he was not to be overcome by tortures, or withdrawn from the exercise of the Christian religion, he ordered him to be put to death. … The executioner, who was to have put him to death, … moved by Divine inspiration, hastened to meet him at the place of execution, and casting down the sword which he had carried ready drawn, fell at his feet, praying that he might rather suffer with the martyr, whom was ordered to execute or, if possible, instead of him. … Here, therefore, the head of most courageous martyr was struck off, and here he received the crown of life, which God has promised to those who love Him.  … At the same time was also beheaded the soldier, who before, through the Divine admonition, refused to give the stroke to the holy confessor. Of whom it is apparent, that though he was not regenerated by baptism, yet he was cleansed by the washing of his own blood, and rendered worthy to enter the kingdom of heaven’.

There are many today who are called to offer their lives for the Faith. May they be inspired by the prayers and witness of St Alban, and may God bless you in your own life this day. 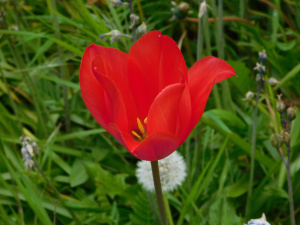