In Staffordshire, today is kept as the Optional Memoria of St Modwen, Virgin. This saint, an Irish Abbess, is believed to have come to Burton on Trent towards the end of the seventh century, to live in a monastic cell on Andressey, an island in the Trent. Conchubranus, an eleventh century Irish monk and the earliest biographer of St Modwen, wrote: ‘When they reached the river called Trent which flows past Mount Calvus, which is in English called Scalpcliffe, they built here a church consecrated to God and St Andrew, which place is called Andressey because it is a small island. In it, St Modwen and Lazar and Althea dwelt seven years. And after they returned from Rome, they built a church on the other side of the water in honour of St Peter and St Paul; and God through them wrought many miracles near the aforesaid river’. St Modwen died in Scotland. She was first buried on Andressey, but her bones were eventually placed in a shrine in the abbey church. Her shrine was destroyed at the time of the dissolution of the monasteries.

May St Modwen pray for us, and may God bless you this day. 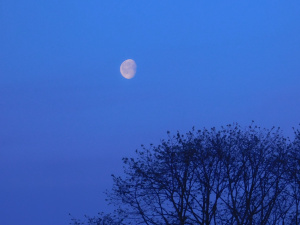