Here is one of the special Gospels for today, from St Luke: ‘Now as they went on their way, he entered a village; and a woman named Martha received him into her house. And she had a sister called Mary, who sat at the Lord’s feet and listened to his teaching. But Martha was distracted with much serving; and she went to him and said, “Lord, do you not care that my sister has left me to serve alone? Tell her then to help me.” But the Lord answered her, “Martha, Martha, you are anxious and troubled about many things; one thing is needful. Mary has chosen the good portion, which shall not be taken away from her.”’

Between Martha, distracted by much serving, and Mary, who has chosen the good portion, stands the peaceful figure of Lazarus in the image below, whom Jesus raised from the dead. The Eastern and Western churches have different traditions about what happened to Lazarus after the resurrection of the Lord.

The Western tradition is that Mary, Martha and Lazarus escaped in a boat, which eventually brought them to Marseille in southern France. He is said to have become its first Bishop. The Eastern church, however, teaches that the three travellers arrived in Cyprus where Lazarus became a Bishop. Later, his remains were said to have been removed to Constantinople.

Wherever and however he died, he can still and does pray for us, who follow His Lord. May God bless you this day. 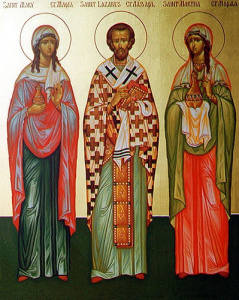