History of the Sisters of the Blessed Virgin Mary 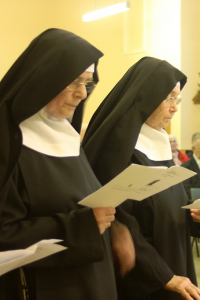 The community known as the Sisters of the Blessed Virgin Mary (SBVM) grew out of the Anglican Community of St Mary the Virgin, founded in 1848.

In 2009, the Apostolic Constitution Anglicanorum Coetibus of Pope Benedict XVI was issued, which states: “In recent times the Holy Spirit has moved groups of Anglicans to petition repeatedly and insistently to be received into full Catholic communion individually as well as corporately. The Apostolic See has responded favourably to such petitions. Indeed, the successor of Peter, mandated by the Lord Jesus to guarantee the unity of the episcopate and to preside over and safeguard the universal communion of all the Churches, could not fail to make available the means necessary to bring this holy desire to realization”.

Accordingly, on 1 January 2013, a group of Sisters from the Anglican Community of St Mary the Virgin were received into the full communion of the Catholic Church. Together with a Sister from the Anglican Society of St Margaret (who had already been received), they founded a new Catholic community, the Sisters of the Blessed Virgin Mary. We were initially a Public Association of the Faithful but were erected on 1 January 2014 as an Institute of Consecrated Life within the Personal Ordinariate of our Lady of Walsingham.

At the time of our reception into the Church, we adopted the Rule of St Benedict. After an initial period of monastic formation at St Cecilia’s Abbey on the Isle of Wight, in August 2013, we moved to our present location in Birmingham, part of the area known as “Maryvale” which was named by Blessed John Henry Newman.

Here we have become established as a Community of enclosed nuns living under the Rule of St Benedict. As the Holy Rule expresses it: “As we progress in our monastic life and in faith, our hearts shall be enlarged, and we shall run with unspeakable sweetness of love in the way of God’s commandments; so that, never abandoning his rule but persevering in his teaching in the monastery until death, we shall share by patience in the sufferings of Christ, that we may deserve to be partakers also of his kingdom”.