‘In these days he went out into the hills to pray; and all night he continued in prayer to God. And when it was day, he called his disciples, and chose from them twelve, whom he named apostles; Simon, whom he named Peter, and Andrew his brother, and James and John, and Philip, and Bartholomew, and Matthew, and Thomas, and James the son of Alphaeus, and Simon who was called the Zealot, and Judas the son of James, and Judas Iscariot, who became a traitor’.

And so we learn that Jesus prayed all night before calling the twelve apostles. Very ordinary men, they yet form the basis of the Church, which is ‘built on the foundation of the apostles and prophets, with Christ Jesus himself as the chief cornerstone’.

May these two faithful apostles pray for us, and may God bless you this day. 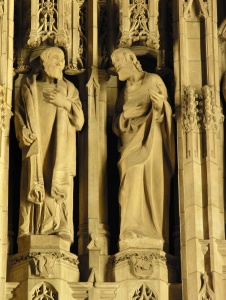